RESURGENCE OF AN OFFSHORE CLASSIC BY LATITUDE 38

You are here:
History 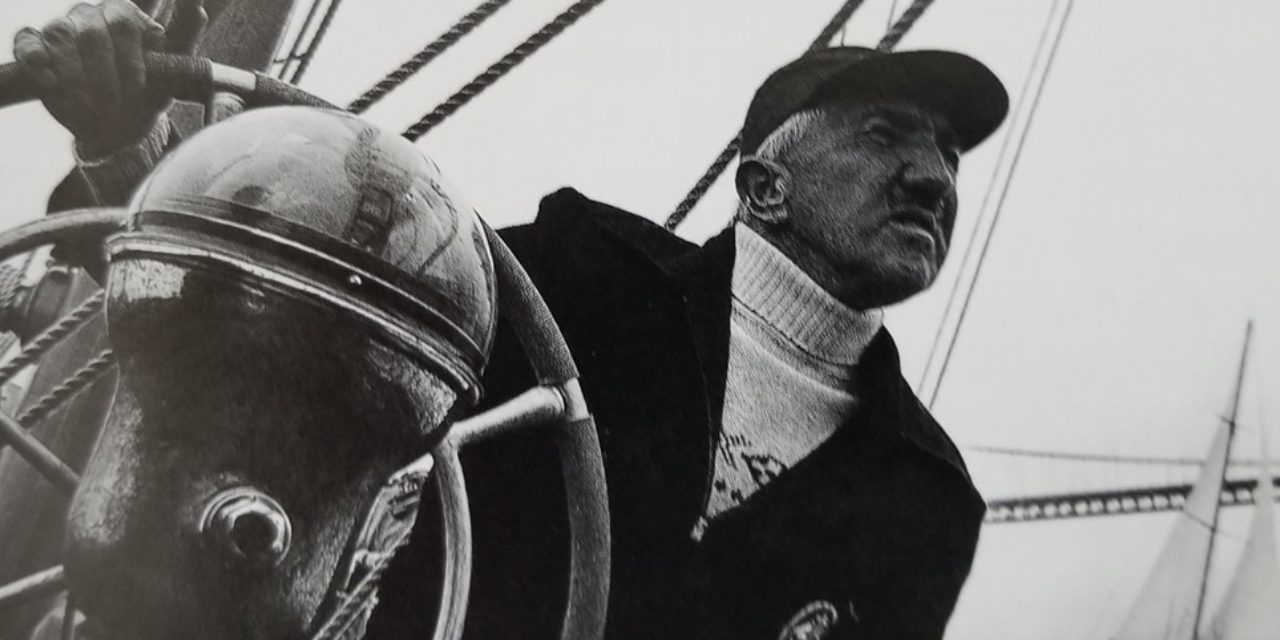 Whether your involvement in offshore racing includes eagerly standing watch at all hours in all weather, or is limited to watching transponder tracks move across your computer screen while you’re comfortably perched in an easy chair, we think you’ll be interested to learn about the resurgence of a Pacific Ocean classic: the 3,570-mile Transpac Tahiti race, which is slated to begin May 28 from Long Beach. 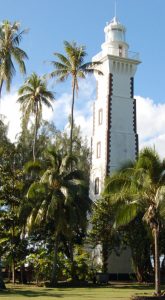 The Pointe Venus light will usher racers toward the finish line.

When first staged in 1925, this marathon sprint from California to Tahiti’s Pointe Venus became the longest non-stop yacht race in the world — 1,350 miles longer than the Hawaii Transpac. Even today, apart from around-the-world races, it is probably still the longest. (The Route du Rhum — from Europe to the Caribbean — is 30 miles shorter).

In addition to the Transpac Tahiti’s jaw-dropping length, though, there’s another key factor that sets it apart from its better-known West Coast cousins, the (Hawaii) Transpac, the Pacific Cup and the Vic-Maui. That is that navigators must contend with the meteorological wild card called the ITCZ (Intertropical Convergence Zone) when choosing where to cross the equator.

At a gathering of potential entrants earlier this year, veteran ocean racer John Jourdane laid out the elements of the course:

” It’s a harder race than Transpac in a lot of ways. You go around the west end of Catalina, and instead of being hard on the wind for a day or two or three, you actually put up your kite and start heading southwest.

Then you run with your spinnaker all the way down to the equator — to the doldrums. The wind comes forward, and instead of running you’re reaching. It’s often a pretty hard, windy reach until you find your way through the doldrums. You’ll work your way through light winds with a lot of thunderstorms. And when you come out the other side, it’s a hard reach all the way to Tahiti. But once you arrive, it’s absolutely wonderful. “ 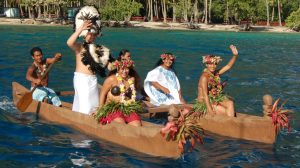 This year, the traditional Polynesian welcome that arriving sailors will receive will likely be more lavish and colorful than ever, as race organizers at Transpac YC have teamed up with the nautical event specialists at Tahiti-based Archipelagoes.

As racers will learn upon arrival, French Polynesians take great pride in showcasing their cultural heritage through music, dance, sport and cuisine.

To fully appreciate the legacy of this venerable competition, it’s helpful to turn back the clock to the early days of California statehood. As West Coast history buffs know, during the Gold Rush and the years of rapid growth that followed, fresh foodstuffs — particularly fruit and vegetables — were in very short supply and commanded sky-high prices.
As a result, entrepreneurial mariners such as Captain Matthew Turner — after whom a Bay Area tall ship was named — proved that making regular produce runs to Hawaii or Papeete and back could be extremely profitable. Turner eventually segued into shipbuilding, with tremendous success. One of his most famous vessels was the schooner Papeete, built for the packet trade. She once recorded a swift passage of 17 days from San Francisco to Papeete.
What’s all this got to do with a con- temporary ocean race? Those early merchant ships firmly established the California-to-Tahiti trade routes that undoubtedly served as inspiration to gentlemen ocean sailors of the early 1900s, many of whom were colorful characters who owned big schooners.
Winner of the first Tahiti race in 1925 — which started from San Francisco Bay that year — was L.A. Norris of the St. Francis YC. Acclaimed to have been one of the era’s leading West Coast yachtsmen, he beat three other competitors to Papeete, setting a benchmark time of 20 days aboard the 107-ft schooner Mariner, which was also the Transpac record holder at the time.
Described by club historians as bronzed and weatherbeaten, Norris had circumnavigated in 1910 aboard the 92-ft Seafarer “on one of his several honeymoons.”
Over the years some highly-renowned yachts have run the course, and the re- cord has been broken a number of times — perhaps most famously in 1964 when the 72-ft L. Francis Herreshoff ketch Ticonderoga completed the passage in 17 days. It was 30 years later (1994) before the record was broken again, this time by the Santa Cruz 70 Kathmandu, which brought the bench- mark down to 14 days, 21 hours.
There it remained for 14 years (2008) until Doug Baker and crew aboard the Andrews 80 Magnitude 80 shaved it by another 3.5 days, to 11 days, 10 hours.

Since its debut 94 years ago, the Transpac Tahiti has been run 15 times intermittently, often with very small fleets. But this year, thanks to renewed enthusiasm on both sides of the equator, an impressive fleet of 10 boats — as long as 80 feet — has already signed up, and additional contenders are expected to commit soon.

Several, including Roy Pat Disney’s modified Volvo 70 Pyewacket, are definitely gunning for Mag 80’s elapsed-time record. In fact, according to long-time Pyewacket team manager Robbie Haines, Disney bought this boat specifically to challenge the record. If you’re curious, her modifications include a taller stick and a deeper keel than ‘stock’ versions.
“Since entering,” says Haines, “Roy Pat has gotten more and more excited about the race. We’ve got a good crew lined up, so we’re rarin’ to go!” In order to set a new course record, Pyewacket — or any other challenger — will have to do better than Magnitude’s 13-knot average, and many insiders think that’s doable. Adding to the excitement aboard Pyewacket, only one crewman has sailed this route before, “and that was 30 or 40 years ago,” according to Haines.

For the first time ever, the 2020 edition of the race is open to multihulls — meaning that whichever boat wins will establish the inaugural multihull record. At the moment that honor
would seem destined to go to John Sangmeister’s Orma 73 Tritium, the sole multihull entry, although it’s still six months until the May 1 entry deadline. “Tahiti is one of my most favorite places on Earth,” says Sangmeister, who anticipates, “The race will be an epic ad- venture.” He’s done seven Hawaii races, but this will be his first sprint to Tahiti.

In addition to these and the other big, sexy speed machines — including Steve Meheen’s Botin 80 Cabrón, Bob Lane’s Andrews 63 Medicine Man, and Damon Guizut’s R/P 77 Zephyrus — Tahiti-based Frenchman Benoît Parnaudeau has entered his Class 40 Nacira, and he encourages other Class 40 owners to follow his lead.

Meanwhile, the Ia Orana division (meaning ‘hello’ in Tahitian) has attracted a disparate fleet of entries, whose skippers had differing motivations for signing up.

The most famous among them is the 1929 S&S wooden classic, Dorade. As widely reported here and elsewhere, since she came under the ‘stewardship’ of Matt Brooks and Pam Rorke Levy less than a decade ago, the 52-ft yawl has competed and excelled in many of the long-established offshore races that cemented her fame in the 1930s as a true thoroughbred, and one of the most distinctive boats ever designed by Olin Stephens.
“The Tahiti race has always been on my bucket list,” says Matt. “It’s a very significant race, and I love long, substantial, challenging bluewater races.”

Andy Kurtz has entered the Columbia 57 Angelique, a design many would consider to be a ‘plastic classic.’ “I’ve been twice across the equator,” he says, but I’ve yet to visit French Polynesia, and I’ve wanted to go there forever.”

“The crew isn’t finalized yet,” says Andy, “but there are both guys and gals going. I think this is a bucket list item for a couple of them.”

For Bill Boyd and his longtime sailing buddy Scott Atwood, it’s even more than that. Their boat name refers to their shared goal of doing the Transpac Tahiti with their daughters, then cruising through the tropical South Pacific together afterwards.
“Scott and I have given great thought to our motivation for doing this race. We both have a love of the sea, have sailed all over the world, hundreds of thousands of miles. But the thrill of sailing with the most precious things in the world to us — our daughters; the dream of making landfall with them; the special bonding under the stars, seeing the Southern Cross together for the first time in their lives; sailing in the southern latitudes; crossing over the equator; and watching water run down the drain in the other direction; that’s what Dad’s Dream is all about.”
And we have no doubt that they’re serious. “When I entered the race, our plan was to sail my Morgan 382, but with all the latest entries, I’ve decided to get a faster boat. So my Morgan is up for sale and hopefully it will soon be upgraded to a SC 40 or a Sydney 41.”
Between them, these guys have done 19 Transpacs to Hawaii, and Bill raced to Tahiti once before. As with the crews of both Dad’s Dream and Angelique, we expect most of the
racer/cruiser entries will linger in the South Pacific awhile island-hopping in cruise mode, and perhaps taking part in South Pacific fun fests such as Tonga’s Blue Water Festival or Fiji’s Musket Cove Regatta (both in September). Some of the top-tier speed machines may head to Australia to do the Rolex Sydney-Hobart in December.

Of course, the other South Pacific magnet for visit- ing yachts in the coming months will be the 36th America’s Cup in Auckland, New Zealand (March 2021), and the events leading up to it such as the AC World Se- ries in October, 2020. 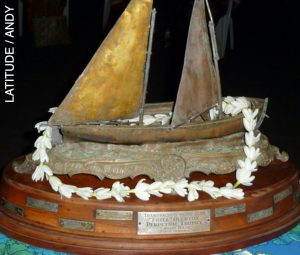 Being nearly 100 years old, it’s no wonder the Transpac Tahiti trophy is a bit tarnished. Every win recorded on it was hard-won.

Since its inception in 1925, only 72 boats have done the Transpac Tahiti race — more people have climbed Mount Everest than have crewed in it.
Covering a distance 38% longer than the Hawaii Transpac, this legendary contest is sure to be as exhausting as it is fulfilling — especially for those holding down the windward rail on the tight reach to the finish. But as many race veterans will confirm, doing it could be the greatest sailing adventure of your life.

So if you get a chance to sail this time-honored course next spring, we’d highly encourage you to do it.