At the Tip & Shaft Connect in Paris 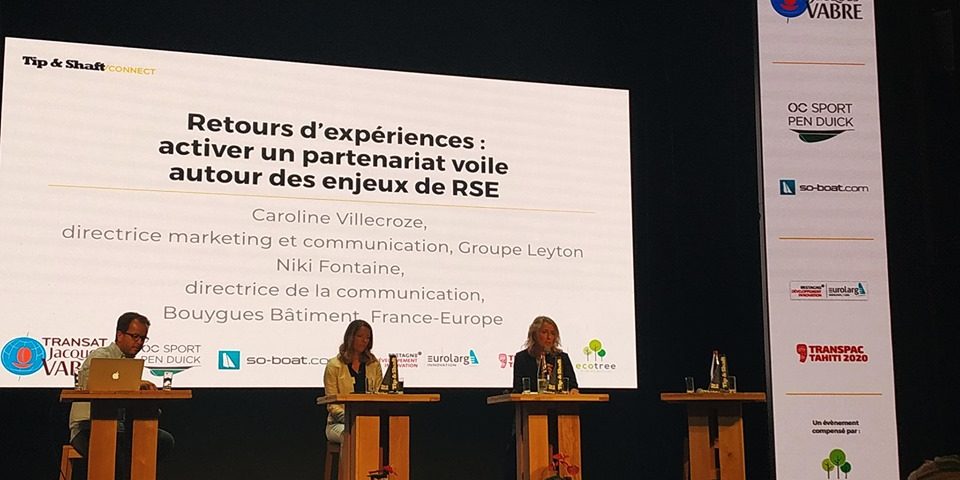 Representing Archipelagoes, co-organizer of the Transpac Tahiti 2020 along with the Transpacific Yacht Club, Stéphane Renard was present at the Tip & Shaft Connect conference in Paris last month. This sponsored event was attended by the top industry and media in the French sailing culture, and thus brought a greater visibility to the 2020 Transpac Tahiti Race and further promoted the revival of ocean racing in the South Pacific.

Among the audience and speakers were key representatives of France’s elite offshore racing scene, with presentations that represent major races such as The Ocean Race, the Transat Jacques Vabre, the Route du Rhum, the Transat Ag2R or the Tour de France Voile. Many skippers and crews were also present, including those from the IMOCA class and its president, Antoine Mermod. Other speakers included the companies that sponsor the crews and the events who shared their experiences on the subjects presented.

This edition of Tip & Shaft Connect proposed a theme which focused not only on the preservation of the environment but also the impact and responsibility of the world of ocean racing so that this sport can be seen as exemplary in its commitment to the oceans and their well-being.

Anne-Cécile Turner, the Sustainability program leader of The Ocean Race, spoke about the major efforts they are taking on this topic in organizing the most important race around the world. She outlined the development of an ambitious program that will act as a catalyst for sustainability initiatives that focus on the restoration of ocean health, and on the direct impacts generated by racing, on mediation and education, on refining a logistically responsible supply chain, and on the use of some of the resources to promote synergies to allow scientific knowledge to benefit from the deployment of these resources.

Crews and competitors have a responsibility not to try to solve all environmental challenges, but to at the least try to integrate fully conscious steps aimed towards achieving a drastic reduction on the different impacts. The success of such projects often depends on the convergence of objectives shared by the skipper, his team and the main sponsor(s). With the RSE commitments of sponsoring companies, it just makes sense when they accompany this with their sailing teams.

As it is for other race organizers, the Transpac Tahiti 2020 is committed to the challenges of environment preservation, of being responsible, aware, and acting as a bridge between science and industry. With this in mind, the race village set up in May 2020 will highlight the visibility of ecological initiatives in California and Polynesia that increase the knowledge of lagoons and marine wildlife and actively preserve their biodiversity. Non-profits, academia, researchers and innovators will all be able to exhibit (on preferential terms) in the race village to raise awareness of the extreme fragility of the ocean in general and Polynesian lagoons specifically.

Moreover, on this occasion, Stéphane was able to meet professional skipper Paul Meilhat, who had to stop over in Tahiti at the end of 2016 following an accident on his IMOCA 60 SMA that forced him out of a very hectic Vendée globe race.

Attracting these kinds of competitors and making them consider racing a Pacific Ocean course remains a major objective of the Transpac Tahiti 2020 and its partners.