Invited and welcomed by Mr Ian Cook, Commodore of the RNZYS, Mrs Stephanie BETZ, co-organizer of the Tahiti Pearl Regatta and the Transpac Tahiti 2020, enjoyed presenting to this great audience of important Yacht Club members, several reasons that should encourage kiwi sailors to sail to Tahiti.

This tahitian event in the heart of the sailing world in Auckland -the city of sails- was also the perfect moment to announce the official launch of the Transpac Tahiti 2020 ocean race, organized by the Transpacific Yacht Club and Archipelagoes. This race from Los Angeles to Tahiti, starting on May 28th 2020, on the way to the 36th America’s Cup, gives the opportunity to racing boats as well as super yachts based in the Atlantic or on the American West Coast, to join New Zealand and the 36th America’s Cup festivities in a challenging way, with a 12-year old monohull record to beat and a multihull one to hit. 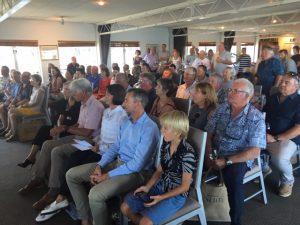