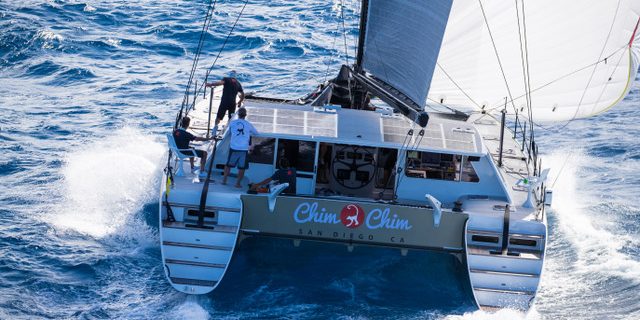 John Gallagher’s Gunboat 62 Chim Chim is the race’s first luxury performance multihull to enter the 2020 Transpac Tahiti Race. This Morrelli and Melvin-designed catamaran was built 15 years ago in South Africa yet has remained incredibly active in the last five years: not only has she raced in the 2015 and 2017 Transpac races to Honolulu at 2225 miles each, but also raced over 1000 miles in the 2018 San Diego-Puerto Vallarta Race and a few editions of California Race Week as well.

John and wife Carol then sought both adventure and close competition in an active Caribbean campaign last year, starting with the Pineapple Cup (Miami to Montego Bay, Jamaica) in January, followed by the Caribbean 600 in February – here they won their class in a challenging 600-mile island tour that starts and ends in Antigua. In March they joined several other big cats in the fun but intense day racing of the BVI Spring Regatta, followed by the same at Les Voiles des St Barth in April.

Yet among this active schedule the Tahiti Race was in the minds of the Chim Chim team.

“We’ve been fortunate to have a pretty consistent crew over the past few years,” John said. “It was during the 2017 Transpac we were talking about the Tahiti race and decided we would like to do if it became an option.”

The opportunity to do this race arose for Chim Chim after some cracks were discovered in her large carbon mast. Unable to get a new mast built and delivered in time for the Caribbean season, the team now realized the Tahiti Race was possible if the boat could get back to California for the commissioning and rigging work needed. So instead of taking a leisure route west through the Panama Canal and north up the coast, Chim Chim is headed back by ship, due to arrive in Ensenada in late February.

“After 15 years of sailing, its not surprising we found some issues in the spar,” he said, “so in order to sleep better we ordered a new rig. It’s the same size as the old spar, just a little lighter and stronger.”

To save time and expense, the team will use some of the same rigging parts and sails, although John said “We finally pulled the trigger on a new main. The old one had upwards of 25,000 miles on it, so it’s about time.”

John’s goal is to be ready to do sea trials with the new spar in April so there is sufficient time to be prepped and ready for the 3571-mile race to Papeete. The Newport to Ensenada Race in late April is a target for the team to regain their offshore stride for when the starting gun goes off on May 28th off Point Fermin.

For crew John is planning on bringing 9 members of their core team, which is composed mostly of amateur sailors.

“It was hard for some to get the time off, but I think everyone is now set. It’s a great group, we’re all really looking forward to this!”