At the departure of the “50th Transpac Honolulu Race 2019” 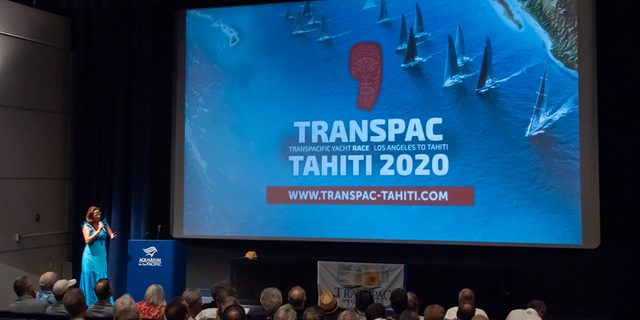 Successful promotion of “Transpac Tahiti Race 2020” in Los Angeles at the departure of the “50th Transpac Honolulu Race 2019”.

For several months, the company Archipelagoes has collaborated with the Transpacific Yacht Club of Los Angeles in order to revive a Transpacific offshore race from Los Angeles to Tahiti: the Transpac Tahiti Race 2020. The start date for this race is May 28, 2020 in Los Angeles, with an 11-day monohull record to beat and a multihull record to set. A dynamic communication campaign has been in place since the official announcement of the race in February 2019 by the Transpacific Yacht Club in Los Angeles, with a website (transpac-tahiti.com), posters, brochure, articles in international specialized media, and promotional events held at various yacht clubs from Tahiti, Auckland, through Nouméa, Long Beach and Los Angeles, California USA. 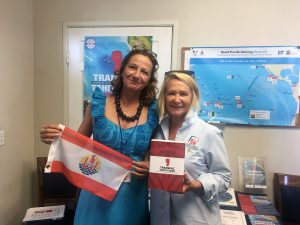 In this context, the team of Transpac Tahiti 2020 was invited to promote the race at the start of the LA-Honolulu Transpac, organized by the Transpacific Yacht Club. For this 50th edition, 90 sailboats were featured in three separate starts at Point Fermin in Los Angeles. “More than 50% of the sailboats registered for the Transpac Honolulu race are more than 40 feet in length (the minimum size required for our race to Tahiti), and therefore were the target of our Los Angeles – Tahiti 2020 race promotion campaign,” said Stéphanie Betz, Manager director of Archipelagoes. Four of the seven monohulls entered in the Transpac Honolulu race have already pre-registered for the Transpac Tahiti race 2020. They received a box of products “made in Fenua” as a sign of welcome in next year’s south sea race to Tahiti. 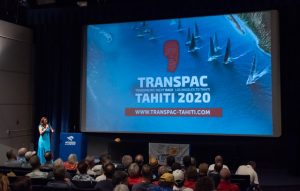 The team of the “Transpac Tahiti 2020” was able to make a 10 minute presentation in the large theater of the Long Beach Aquarium during the skippers briefings of the 90 skippers and their crews registered for the Transpac Hawaii 2019. “The audience was particularly interested, and several sailboat crews came to see us after the presentation to confirm their interest, including the largest of the fleet, the Rio 100,” added Stéphanie Betz. 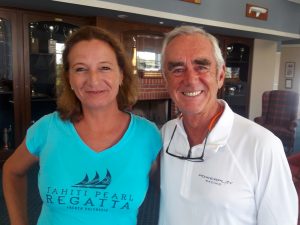 For multihulls, although there are no pre-registered teams yet, the organization has a major ambassador for this division. Indeed, Mr. Loic Peyron, Godfather of the Tahiti Pearl Regatta since 2018, has fallen in love with the water-filled playground of Polynesia. He was also present at the start of this race aboard the trimaran MOD 70 (Multihull One Design 70-foot) of the PowerPlay team. He did a wonderful job boasting about the “Transpac Tahiti” to other competitors in this division. After this promotional event in Long Beach, two owners of MOD 70 have shown interest in taking up the challenge of coming to Tahiti to set a new record.

This trip also allowed the “Transpac Tahiti” team to familiarize themselves with the venues of the competitor’s reception festivities at the Long Beach marina and with the starting line at Point Fermin adjacent to Los Angeles harbor. “We can now prepare to organize the departure village of Transpac Tahiti in Long Beach, which will highlight many aspects of Tahiti as a nautical and tourist destination, but also in terms of its cultural and maritime heritage, highlighting the historical links between Fenua and California, and beyond, between the USA and France.”

The next highlight of the promotional campaign is a scheduled presentation of the Transpac Tahiti 2020 at the prestigious St Francis Yacht Club in San Francisco on August 22, 2019.

The Transpac Tahiti 2020, which will take place before the America’s Cup and could be for some yachts a race on the road to its venue in Auckland, is already supported by the French Polynesia Ministry of Tourism, Air Tahiti Nui, the municipality of Papeete and the Harbor Master of Papeete.